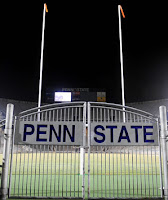 As someone who has dedicated most of my adult life to providing positive developmental experiences to kids, I was angered and saddened by the abuse carried out by former Penn State assistant football coach Jerry Sandusky. Fortunately most camps have multiple safeguards in place to prevent the horrible things that happened at Penn State from happening at camp.

What happened to these skilled, experienced, highly respected leaders?

1. An all consuming focus on an organizational goal. At Penn State having a winning football program was the most important goal. Using this goal as a filter through which to make decisions warped leaders' perspectives. Anything that hindered pursuit of the goal became an obstacle to be overcome.

2. Allowing relationships to cloud judgement. Coach Joe Paterno's long relationship with Jerry Sandusky made it difficult for him to accept the truth. He didn't want to believe what the evidence suggested. His friendship led to inaction which enabled Sandusky to continue his abuse.

3. Caring more about public reputations rather than doing what's right, but embarrassing. Penn State had a reputation as a winning football program that played by the rules. Joe Paterno was college football's winningest coach who was considered one of the greatest coaches of all time. Penn State chose to protect the reputation of its program and coach rather than dealing with the realities of what was happening.

As leaders we need to be mindful of the failures at Penn State. We need to be wary of the problems that brought down one of football's greatest coaches and programs. Most importantly, we need to commit to leading with honesty, integrity and a focus on doing what's right.