This summer our camp had a forest fire. Due to our location, two agencies took on the responsibility for fighting the fire. While both agencies worked to control the fire and protect the camp, their approaches were completely different.

Our state Department of Forestry was one of the agencies that worked on the fire. They responded quickly and rapidly deployed resources to our site. Within a few hours of the fire being located, the Forestry folks brought in two bulldozers. They spent an entire afternoon and evening using the dozers to build fire breaks which created a perimeter around the fire. Once the fire breaks were in place they left and were rarely on site for the two and a half weeks the fire burned.

While the fire breaks built by the Forestry Department effectively prevented the spread of the fire, their long term negative impact will be significant. Several of the fire breaks were formerly hiking trails that have been completely destroyed by the bulldozers. In many locations, the fire breaks which crisscross our steep terrain have turned into areas of serious erosion. Several of the small seasonal streams at the camp have become clogged with silt from the runoff. It will likely take years for the bulldozer built firebreaks to recover. 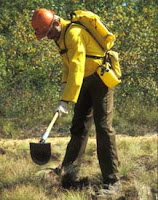 The other agency that responded to our fire was the National Park Service (NPS). Each day, several wildland firefighters from the NPS were on foot patrolling the fire. They constantly assessed the fire and adapted their efforts to what was happening. When an area was threatened, the NPS would build a fire line by hand. Using rakes, hoes and occasionally a chain saw, the NPS built small fire lines where needed. Most of their efforts consisted of doing nothing more than raking leaves and downed debris. A month after the fire, many of these fire lines are naturally disappearing. By fall any trace of these fire lines will be gone.

As leaders we are often confronted with the same choices our fire crews faced. Too often we respond like the Forestry Department. We deal quickly with a problem using maximum force. Our goal is to deal with the immediate impact of the problem, with little focus on the long term impact.

We might be more effective if we responded more often like the NPS. Take a slower, more controlled approach. Use only the amount of force needed. Sacrifice some immediate relief for a better long term result.
Posted by John Erdman at 7:00 AM